Composition of the population

The size of the population of Ostia during its heyday, the later second century, is often said to have been between 50.000 and 60.000, an educated guess, but surely not very far from the truth (the extremes that have been mentioned are 27.000 and 100.000). The first scholar to write specifically about the population was Tenney Frank, who in 1934 published an article entitled "The People of Ostia". He calls Ostia "a city of hard-working folk, a majority of whom were doubtless slaves", and "the most profitable trade was largely in the hands of outsiders. Most of these people came from the drifting groups of emancipated slaves that sought work at such towns as this. Here slaves and freedmen were treated with generosity. The political aristocracy of the town were to an unusual degree men of recent families who seem to have won their limited success in trade and industry. Very few of them were strikingly rich". It would not be until 1960 that the topic was discussed thoroughly, by Russell Meiggs.

Meiggs distinguishes a few main phases in the development of the governing class. Until the end of the first century AD it was composed of a narrow aristrocracy. Starting in the Flavian period we see the rise of a wealthy middle class, including some freedmen, with business interests. This tendency kept developing until the middle of the third century AD. Many of the early families seem to have left Ostia, died out, or lost their place in the governing class. With the economic crisis of the third century the middle class collapsed, and the gulf between rich and poor widened.

Roman citizens were enrolled in a tribus, a tribe. The commonest tribe in Ostia was Palatina, followed by Voturia (abbreviated in inscriptions as PAL and VOT). Voturia was the old, original tribe of Ostia. Enrollment in Palatina started in the second century AD (but may then also be assigned to men of freedmen stock from old Ostian families). Other tribes imply an origin outside Ostia. Quirina for example was the most widely distributed tribe in Africa. Many members of the rising middle class of the second and third century did not have an Ostian origin.

The Ostia of the second and third century was characterized not only by new arrivals, but also by the extensive manumission of slaves. "The freedman is at the very centre of Ostian society", concludes Meiggs. Relations between freedmen and patrons were close. Patrons provided space for freedmen and freedwomen in their tombs. On the other hand, freedmen regularly provided for the burial of the patron. Often patrons married a former slave, but freedmen rarely married a daughter of their patron. In various ways freedmen were launched into business by their patron, providing money, sometimes leading to considerable wealth.

The names of slaves can be used as an indication for their origin, but it is a tricky criterion: slave owners could assign names of their choice. The names point especially to the Greek-speaking eastern half of the Empire. Slaves could be acquired in times of war. In peaceful times two important sources were the exposure of children, and the children of slaves (slaves born in the household were called vernae). Slaves were owned by private people (with the Emperor as a very important owner) and the city. It was common for freedmen to buy slaves themselves.

The names of the people of Ostia (including Portus) were studied extensively by the Finnish scholar Olli Salomies, and the results published in 2002. He studied the names of 6,900 people, and made comparisons with other Rome (54,000 persons) and Aquileia (2,902 persons).

Looking at Imperial nomina and common nomina (so looking at gentes), no significant differences were found between Ostia and Aquileia. Imperial nomina are somewhat more common in Rome. Of the other nomina, some are more common in Rome, some more frequent in Ostia. Cipius, Egrilius, Livius, Naevius and Nasennius may be called characteristic for Ostia. In this respect Ostia was not simply an extension of Rome. Sometimes connections between Rome and Ostia can be deduced from the nomina. Thirteen nomina occur in Ostia and Rome, but nowhere else. On the other hand, 52 nomina are found in Ostia and elsewhere, but not in Rome, whereas another 54 nomina occur in Ostia, but nowhere else. Here Salomies prefers to think of immigration, not of traditional Ostian names: imigration from outside Italy, because there can hardly have been any Italian cities from which people migrated only to Ostia, and not also to Rome (but Salomies leaves open the possibility that in certain periods Ostia offered more possibilities for immigrants than Rome). 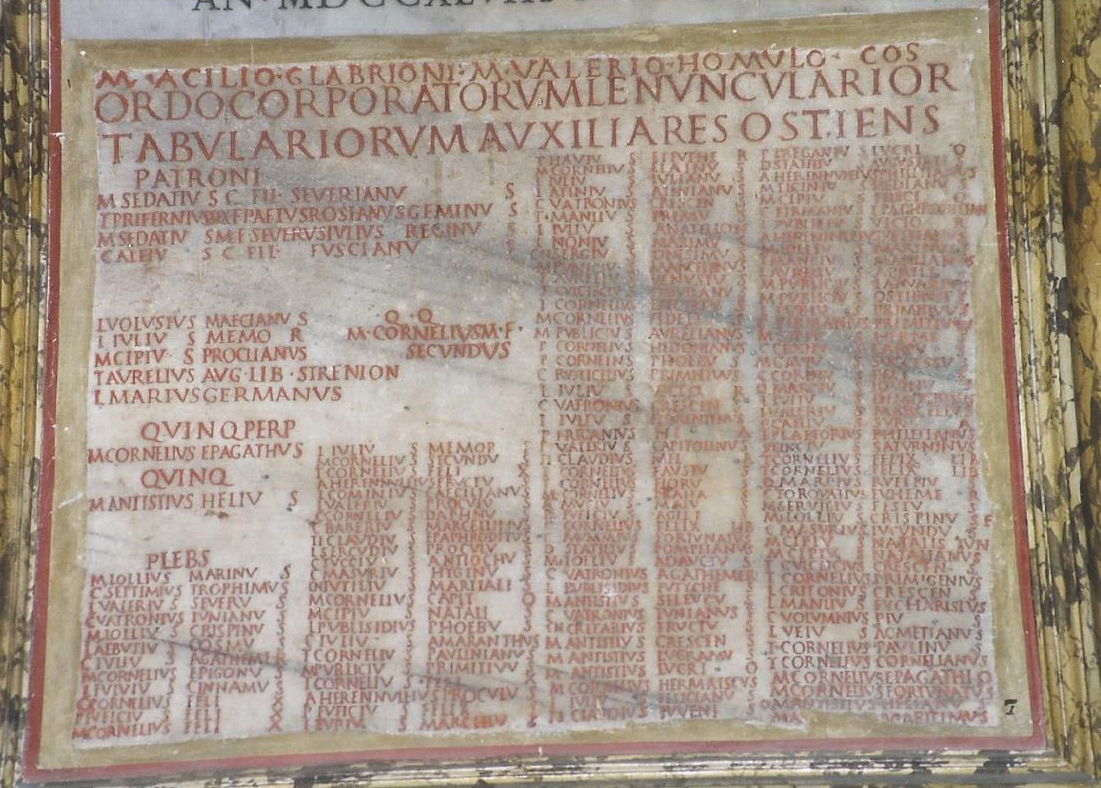 A list of the members of a guild in the Capitoline Museums.
CIL XIV, 250 from 152 AD. Photo: Eric Taylor.

Salomies also looked at the chronological distribution, distinguishing between early texts (up to the second century AD) and later texts (from the second century AD and later). Twelve nomina do not appear any more after the early period. Fifty-one appear both in early and later inscriptions. This does not necessarily point to continuity, because people from all around the Roman world must have been coming to Ostia all the time. However, in many gentes also the same praenomina were in use for centuries (for example Auli Mucii and Auli Egrilii), which does suggest continuity. Many nomina are not attested before the middle of the second century. In this group often only one praenomen is attested, reinforcing the idea that we are dealing with new arrivals.

Twenty-two nomina in Ostia are normally combined with only one praenomen, Nasennius with Caius for example. There are of course also examples of nomina combined with different praenomina, for example six different praenomina for ten Rubrii. When trying to explain these phenomena it should be remembered that in almost all Roman families the number of praenomina in use was reduced to only one during the earlier principate. Furthermore, since the late Republic, freedmen regularly took the praenomina of their patrons, and it was common for men to retain their slave name when freed. Gentes of which only one praenomen is documented must be either late arrivals, or were represented only by a small number of successful people, who had many descendants and freedmen. When many praenomina are documented we can think of early settlers, in a period when it was still normal to give each son a different praenomen. However, members of the same gens may of course also have arrived at different times, independently of each other, even from different regions.

When slaves working for the civitas Ostia or in the salt industry were freed, they received the nomen Ostiensis or Salinator. For some reason the Salinatores always have the praenomen Marcus, whereas six praenomina are documented for the Ostienses. Salomies cannot find a good explanation for this phenomenon, nor for the remarkable frequency of the praenomen Decimus, documented in 28 gentes. Perhaps it is linked to immigration from the south of France, from Gallia Narbonensis. Surprisingly common is also the cognomen Mercurius (21 gentes), without doubt related to the commercial character of Ostia.

It is to be expected that members of the governing class leave clear onomastic traces, because numerous freedmen and descendants of freedmen took their name. A good example of this phenomenon in Ostia are the Auli Egrilii, more than 200 of which are documented. Salomies however also sees several magistrates whose nomen is not otherwise attested in Ostia, and several others who did not leave onomastic traces at all or only a few (in funerary epitaphs and in the lists of members of guilds). A striking example is that of the Publi Lucilii Gamalae, a very prominent family with only a handful belonging to the plebs. This problem has not been resolved.