In the late-republican period a wall was built for the protection of Ostia. Visitors will look in vain for it, because hardly anything has been preserved. It is attested to the west, south and east of town, but it is not known whether it continued along the Tiber. If it did not, it was over 2100 meters long. Towards the west it must have ended at or near "Tor Boacciana" (in its present state largely mediaeval), a lighthouse or watch-tower near the mouth of the Tiber. Together with the river the wall enclosed an area of approximately 69 hectares.

A concrete nucleus was faced on the outside with small, square tufa blocks placed on one corner. The pattern is rather irregular (opus quasi reticulatum). The inside did not have a facing and may have been reinforced by beaten earth. There were three major gates, the modern names of which are Porta Marina, Porta Laurentina and Porta Romana. In between were round towers, a square tower (close to the Tiber), and minor gates. Only one minor gate is indicated on the plan. However, Guido Calza unearthed many stretches of the wall, but not all of it. At least one other minor gate was found in the late 1990's by Michael Heinzelmann. Recently a team of the University of Southampton, led by Simon Keay, recognized a city wall on the other side of the Tiber, on the Isola Sacra. This stretch is known through geophysical research only, and is as yet undated.

The wall has often been ascribed to the early first century BC, to Sulla (88 - 79 BC). However, researchers have always agreed that there is no hard evidence for this dating. A crucial date is the year 67 BC, when pirates destroyed a fleet in Ostia and plundered the city. Does this event imply that Ostia was not yet protected by a wall? Cicero commented:

Important information is offered by two virtually identical inscriptions that were attached to the upper part of either side of the Porta Romana, the gate that was used by those who entered Ostia coming from Rome, or left Ostia to visit the Urbs. The gate as we see it now was rebuilt in the late first century AD, probably during the reign of Domitian (81 - 96 AD). The inscriptions belong to this phase, but record the building history.

The inscriptions were made of the famous marble from the Greek island Paros. The slabs measured approximately 5.60 x 1.36 m. All that remains are many fragments. Various readings have been proposed in the past (Vaglieri, Wickert). New fragments were found in the store rooms by Fausto Zevi, and in 1998 he could propose a new reading. Characteristics such as the diminishing height of the lines and the finishing of the back side enabled him to find for most fragments first a vertical place, then a horizontal place within a single line. The inscription is now reconstructed as follows:

In other words, Cicero, when he was consul in 63 BC, oversaw the start of the construction. Clodius, arch-enemy of Cicero, finished the work when he was tribune of the people in 58 BC. Line 5 cannot be reconstructed completely. It mentions the rebuilding in the first century AD.

Unfortunately we have few written sources about Cicero's year as consul. Nevertheless Zevi was able to trace this event in Cicero's writings. In his works we find references to what Zevi calls a "war of inscriptions": Clodius replaced Cicero's name by his own. Cicero's comments were bitter:

In the latter passage Cicero is talking about "his monument", but explains that it is only "his" because he carried out work ordered by the Senate; it was not his own initiative, financed by booty. And on this monument, he adds, Clodius was allowed to place his name with letters of blood. As to the monuments mentioned in the first passage, Zevi argues that, in spite of the plural (monumenta), Cicero refers to one monument only: the monumentum of the second text. This monument was no other than the walls and gates of Ostia, the construction of which was for Cicero one of the major achievements in his life. His concern about ports, by the way, is evident from another text, about good public spending:

The decision at the end of the first century AD to restore the name of Cicero and the role of the Senate on the Porta Romana may have been influenced by Pliny the Younger, who owned a villa to the south of Ostia.

In the early Imperial period there was no need for a protective wall any longer. The entire area inside the wall soon became built-up. Starting in the period of Augustus buildings were erected next to, on top of, and beyond the wall. During the reign of Vespasian part of the walls was changed to an aqueduct. In late antiquity, when Rome itself and her harbours were threatened by barbarians and eventually invaded, the wall was not restored. In the fifth century Ostia was of little economic significance. Portus was by now the main harbour of Rome. In 410 AD Alaric's Goths captured Portus, but paid no attention to Ostia. Portus was sacked by Vandals led by Gaeseric in 455 AD. They may also have plundered Ostia. Somewhere in the fifth or sixth century the Ostians used the theatre as a fortress.

Links to remains of the wall:

The scant remains of the secondary gate to the south of the Porta Romana,
seen from the east. Discovered in 1856. Photo: Jan Theo Bakker.

The remains of a round tower, in the angle that is made by two stretches of the wall.
From SO I, Tav. 27.

A stretch of the wall to the south of the Porta Romana. From SO I, Tav. 27. 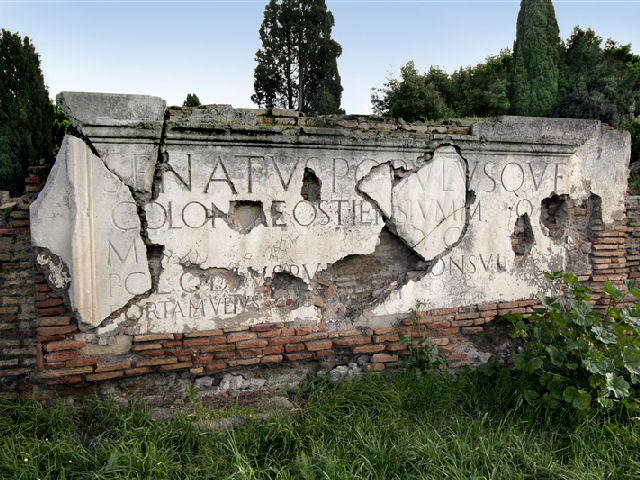 Fragments of one of the Domitianic inscriptions, with modern additions.
Photo: Laura Maish-Bill Storage.
[jthb - 30-Oct-2021]